Boraginaceae (Family)
Forage for Pollinators: Produces an abundance of both Nectar and Pollen which is particularly attractive to Honeybees also very attractive to short-tongued Bumblebees such as Bombus terrestris and B. lucorum. This is one of the best spring forage sources and a widely used bee crop plant in its native North America (and often used in bee regeneration programmes in the British Isles), the blue flowers producing nectar continuously throughout the day (like Echium vulgare).
Flowering time: March, April, May, June, July, August, September.
Growing information: ANNUAL cover crop or green manure growing to 0.6m – 0.9m (2-3ft). It thrives in virtually any well-drained, fertile soil. Hardy to minus 28ºC. If sown when the soil has warmed, it should take approximately two months before flowering. And each crop will flower for up to six weeks; therefore for continuous forage, it is possible to sow in two-monthly succession on adjacent areas. It is feasible to have an autumn sowing standing over winter (as often done for a green-manure), and is particularly useful to prevent serious soil erosion on light or sandy soils over winter in this respect. We certainly had success overwintering Phacelia on several acres in Devon, which flowered spectacularly well as soon as Spring arrived, and audibly hummed with bees of all kinds.
Can be sown direct any time between April and September. Sowing rate 4Kg/acre or about 1gram per m2. 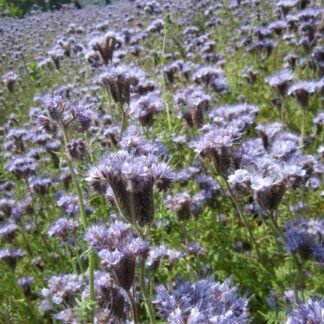