Brassicaceae.
Forage for Pollinators: Produces Pollen and Nectar for bees, though because they are small plants, only large drifts attract Honeybees. Pollinated by Bees.
Flowering time: April, May, June, July, August, September, October, November.
Growing information: EVERGREEN PERENNIAL (short lived) growing to 0.5 m (1ft 8in). Prefers free-draining, alkaline, dry or even rocky places such as sea cliffs. Hardy to minus 17ºC. The true wild species, of which there are many cultivars, which produces flowers in succession over several months, helping to bridge the ‘June-gap’. Interestingly, recent research has shown that this plant contains the chemical compound cheiranthin which has a stronger cardiotonic action than digitalis (obtained from species such as Foxglove) and supporting a failing heart in a similar manner. 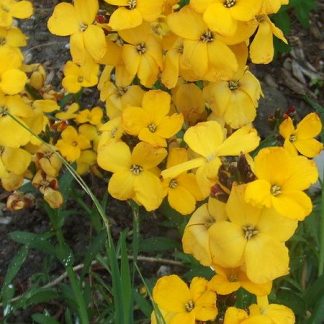