Asteraceae(Family)
Forage for Pollinators: Pollen, white in colour, and Nectar for Honeybees, other Bees, Beetles, Flies. Bees are the primary pollinators and will be covered from head to toe with Chicory’s white pollen grains (excerpt Naturally Curious with Mary Holland).
Flowering time: July, August, September, October
Growing information: HERBACEOUS PERENNIAL, native to Europe and Asia and since the ‘Bronze Age’ has followed civilizations all over Europe, probably including the UK as this has always been an important crop. This is an agricultural variety much like the wild species and grows to 1.5 m (5ft). Suits a wide range of soils including acid and alkaline, heavy and light soils, and will stand in a sward for many years, or permanently if left to self seed, and in the not-so-agressive grasses. As a perennial, it produces only leaves in its first season, resembling a dandelion, and similarly it has a relatively large, brown, fleshy, branched taproot with milky sap. Frequently mowed plants often end up with prostrate flowering stems unaffected by the mower. Chicory is ideally drilled at ¼ – ½ inch (6-12mm) into a prepared firm seedbed, or can be broadcast into existing pasture in early spring, if the sward has been cut back or tightly grazed prior to sowing.
Chicory can be sown on its own but benefits greatly from being in a mixture with legumes which fix nitrogen, and can be sown at the following ratio: 2Kg Chicory, 3Kg Red Clover, 1 Kg White Clover. Adding meadow grass creates a longer-term sward ideal for grazing, and can be sown at the following ratio: 2Kg Chicory, 2Kg Wild Meadow Grass, 1.5Kg Red Clover, 0.5Kg White Clover.
Sowing rate of Chicory on its own is: 6Kg/acre (15Kg/ha, 1.5g/m2) 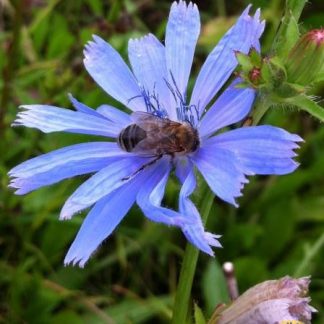