Forage for Pollinators: Produces Nectar in abundance mainly foraged by Honeybees, and can produce excellent crops of honey at times, weather permitting nectar; also for Long and Short-tongued Bumblebees, Solitary bees and Hoverflies. Pollen is also produced for the same foragers. It is considered economically viable to grow Buckwheat as ‘bee pasturage’ on a field scale on soils which are sandy and of low nitrogen inputs, as there is also a resulting grain crop.
Flowering time:June, July, August, September
Growing information:ANNUAL growing to 4’2” (1.25m) by 1’(0.3m). It is frost tender annual crop. Fast-growing it can produce seed in 6 weeks, ripening in 10 or 11 weeks. Its fast establishment is useful in suppressing weeds, making it a reliable grain crop where a short season is available, or used as a second crop in the season, or as a summer cover crop. For a bee fodder crop, 3 or 4 successional sowings can be made at fortnightly intervals beginning in April or May when danger of frost has passed. It is a short season crop that does well on low-fertility or acidic soils which are well drained. Too much fertilizer, especially nitrogen, will reduce yields. Nectar secretion is adversely affected by hot weather, and bees tend to forage on the flowers in the morning on days which become hot. Temperatures around 21ºC are the optimum for good nectar secretion. An acre can yield on average 80lbs honey.
Buckwheat was a common crop in the 18th and 19th centuries. Cultivation declined sharply in the 20th century due to the use of nitrogen fertilizer, to which it doesn’t respond well (and to which maize and wheat respond strongly). This makes it ideal for organic growing methods. It is also a good weed suppressor and phosphate scavenger.
Sowing rate: 30 kg per acre (75 kg/ha, 7.5 g/m²). 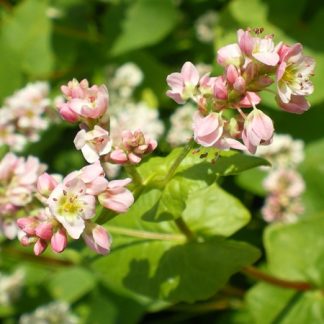