Fabaceae
Forage for Pollinators: Produces Nectar in abundance for many long-tongued Bumblebees such as Bombus pascuorum, B. hortorum, and some of these rarest bees such as the great yellow bumblebee (Bombus distinguenus), the shrill carder bee (Bombus sylvarum) and the short-haired bumblebee (Bombus subterraneus). Remarkably, because the amount of nectar secreted by this Red clover is so abundant (more than in White or Alsike clovers), it sometimes fills the flower-tube, making it accessible by Honeybees too, and it may be a more important minor source of nectar than has been supposed by beekeepers. This is also a Pollen source for Honeybees and Bumblebees. Pollinated by bees and butterflies.
Flowering time: May, June, July, August, September
Growing information: NATIVE PERENNIAL agricultural variety, growing to approx. 0.6 m (2ft) by 0.6 m (2ft), it is a long-lived grassland plant, preferring damp, slightly acid soils, but not needing high nitrogen inputs. It fixes nitrogen into the soil from the atmosphere, and is used for this purpose as a green manure. It is also used in grazing pastures, though for use as bee pasture, it should be left to flower for most of its flowering time before taking one cut in autumn of the sward. It should be sown in April or August and will flower the following year.
Sowing rate: 6Kg/acre (15Kg/ha, 1.5g/m2). 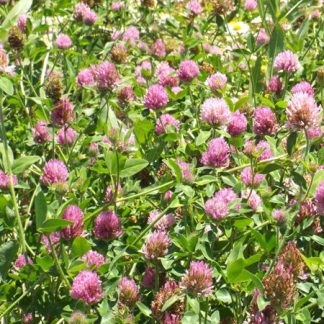