Forage for Pollinators: Produces Nectar and Pollen for Honeybees, Short-tongued and Long-tongued Bumblebees and many solitary bees which build their nests in areas of Heather.

Flowering time: July, August, September, October, November.
Growing information: NATIVE EVERGREEN SHRUB growing to 0.6 m (2ft) by 0.5 m (1ft 8in). Found to have medicinal and protective effects on bees. Research from Kew and Royal Holloway, University of London investigated plants for medicinal effects which can protect Bumblebees from parasites which live in their guts: Nectar from Calluna vulgaris had the most potent effect of those tested, and they believe this helps bees in the wild. Arbutus unedo and Tilia species also had some medicinal effect. Needs acid (Lime-free) soil. Hardy to minus 31ºC. This is a dwarf shrub that is often abundant on mountains and moorland in the UK, and from which honey is harvested as a major crop. The petals are concealed by the familiar purple sepals. An advantage to bees of growing these in a garden is that there is likely to be sufficient shelter for the bees to work the flowers in its later flowering months. Pollinated by Bees, flies, lepidoptera. 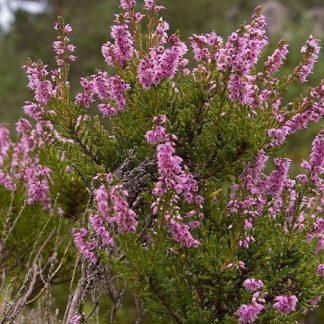