Fabaceae(family name)
Forage for Pollinators: Produces Nectar and Pollen for Short and Long-tongued Bumblebees, Honeybees and Solitary Bees. This nectar is secreted exceptionally freely and is considered one of the highest yielding forage plants. This is one of the few honeys which is purely monofloral in the British Isles. The flowers of Sainfoin attract huge numbers of insects. According to studies, sainfoin can attract ten times more bees than white clover. There are many beekeepers who consider Sainfoin honey to be superior to that from any other source and when sainfoin flowers, it is so appealing to Honeybees that they will often ignore all other nectar sources to forage on it. Pollen is also gathered, it being one of the oiliest pollens available. As Sainfoin flowers in September will be making a big contribution towards bee’s winter reserves.
Flowering time: May, June, July, August, September.
Growing information: PERENNIAL agriculturally improved forage crop, traditionally grown in the British Isles up until Victorian times, suiting free-draining calcareous/chalk or limestone or sandy soils. It requires no added fertilizers, is drought tolerant and is a hay crop that can be grazed.
This type of Sainfoin, otherwise known as ‘Common’ or single-cut Sainfoin, flowers mainly in the year after establishment and thereafter for many years, and is long-lived. In contrast, the other type, ‘giant’ or double-cut Sainfoin lacks persistence and flowers in the establishment year and thereafter for only 2–3 years. Compatibility in mixture: Non-aggressive grasses such as timothy (Phleum pratense ), meadow fescue (Festuca pratensis ) and meadow foxtail (Alopecurus pratensis) are compatible. The addition of white clover or Birdsfoot trefoil (Lotus corniculatus) can be advantageous in stands cut for hay and aftermath grazing. Sowing rate: sainfoin straight seed: 35Kg/acre (9g/m2), should be drilled at between 10 and 20 mm and rolled to form good seed/soil contact. If sown with grasses, sowing rate should be reduced to approximately 7Kg/acre (2g/m2), and drilled at 10mm with non-aggressive grass seed. 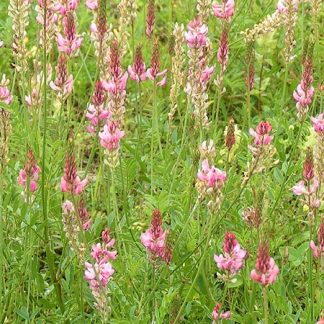