Fabaceae(family)
Forage for Pollinators: Produces a major amount of Pollen for Bumblebees which are declining, such as the short-haired bumblebee (Bombus subterraneus) and ruderal bumblebee (Bombus ruderatus) and the endangered mining bee (Andrena lathyri) which uses only this pollen for its brood, so is dependent on it. Nectar is produced for Honeybees (though not in all years or localities), and like Broad beans, it has extra-floral nectaries which likewise flow about two weeks before flowering. All Bumblebees seem able to feed on its nectar on both the flower and extra-floral nectaries.
Flowering time: May, June, July, August, September
Growing information: ANNUAL CLIMBER growing (scrambling) to 1.2 m (4ft).
This hardy annual prefers open grassland particularly on dry or sandy and alkaline soil. V. sativa ssp segetalis is sometimes thought to be a relic of the fodder crop, but is considered native by some. V. sativa ssp sativa, a very closely related sub-species which overwinters well, even in heavy soils, was introduced and once grown as a fodder crop which was in widespread cultivation in the British Isles before intensification of agriculture, though now rare.

(Sow from March onwards or in August to September for overwintering. Due to hard seed-coat germination can be speeded up with light scarification) 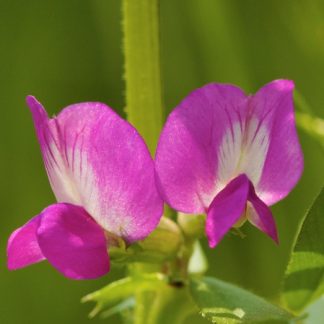