Lamiaceae (family name)
Forage for Pollinators: Produces Nectar particularly attractive to Honeybees, Long and Short-tongued Bumblebees (especially Bombus pascuorum). The largest Solitary bee in Europe (Xylocarpa violaceae) has been sighted in the British Isles over the last few years, notably on Rosemary. In France the honey produced from Rosemary is called Narbonne honey, and in Spain it is also a major honey source. Pollinated by Bees.
Flowering time: April, May, June, and again in some years: November.
Growing information: EVERGREEN SHRUB HERB growing to 1.5 m (5ft) by 1.5 m (5ft). Grows in any well-drained garden, preferring acid soil, though will grow, just not as large, on alkaline soil. Hardy to minus 23ºC, though susceptible to long, hard frosts which can kill out parts of the plant, so protect young plants in winter. This is one of our most familiar and beautifully fragrant culinary herbs whose leaves give off their heady-sweet aroma when rubbed, especially on hot days. The blue flowers appear on previous season’s growth, so best to prune in early spring. Here is the true species plant (as, we presume, brought to the British Isles by the Romans). 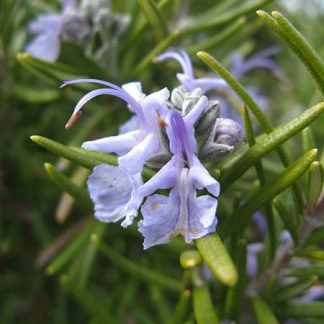