Lamiaceae (family name)
Forage for Pollinators: Both wild Thymes (T. pulegioides, syn. T. polytrichus, and the more dwarf form T. serpyllum) are excellent bee plants for absolutely all bees, honeybees, short and long-tongued bees and solitary bees. It is also the sole breeding site and food for the very rare Large Blue butterfly Phengaris arion (along with Origanum vulgare). Nectar is produced freely with its aromatic flavour. Honey from Thymes imparts an excellent flavour to other honeys, there being so many other flowers in bloom at the same time, though in the British Isles Thyme doesn’t grow extensively enough for a monofloral honey like it does in the Mediterranean where it covers extensive ground.
Flowering time: June, July
Growing information: NATIVE evergreen subshrub growing to 25cm tall and spreading up to 0.5m in 10 years, growing naturally in free-draining neutral to alkaline and poor soils mostly in Southern England often alongside Origanum vulgare, and in full sun. Where these (now rare) wild sites still exist the once extinct and now reintroduced and naturalized from Sweden, Large Blue butterfly can successfully breed. In gardens, any sunny corner area be adapted on any soil if a sufficiently well-draining base is laid and horticultural grit incorporated into heavy clay soils with some added leaf mould or peat-free compost, making sure during the winter it never becomes waterlogged. Thymes will love any dry bank which would also be a prime nesting site for wild ground-dwelling bees. No garden should be without Thymes, including the Garden Thyme (T. vulgaris, which is native to the Mediterranean) even the many ornamental varieties will provide good forage for all bees.. 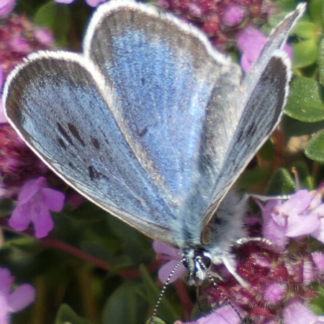