Forage for Pollinators: Produces nectar for bees, Honey bees, Short and Long-tongued bees and particularly Osmia xanthomelana a bee on the verge of extinction, butterflies and moths. Furthermore it is the exclusive food plant of the caterpillars of the Adonis Blue and Chalkhill Blue butterflies which are struggling to recover from calamitous declines
Flowering time: May.

Growing information: NATIVE PERENNIAL wildflower growing up to 8cm tall, but sometimes sprawling. Its small yellow flowers are fragrant and similar to Bird’s-foot Trefoil at first glance, though have 4 or 5 pairs of leaflets instead of 3. Grows only on very well-drained chalk soil and limestone cliffs. In England it is found only on chalk and limestone (termed calciole) in Southern England, where it has suffered catastrophic reductions due to intensified grazing by cattle (after the second world war), whereas it had co-existed with moderately heavy sheep grazing as was traditional for many centuries. It is extremely long-lived, 40 years at least has been noted by botanists. Its recovery is slow, but the best hope is from plants being replanted on Chalk downland, as wild seed sowing is unreliable and slow to establish (possibly in part due to trampling) and this is why it is vital that nurseries grow these important wildflowers. NOTE: Horseshoe Vetch are loaded with a toxin called 3-nitropropionic acid (3NPA). Apart from the butterfly caterpillars of the Chalkhill Blue and Adonis Blue, very few things actually eat it. In symbiosis with soil bacteria they fix nitrogen from the atmosphere like all Fabaceae family members. The plants we supply are from native UK provenance seed, and recommended for rewilding. It should also be noted that the butterfly caterpillars of Chalkhill and Adonis Blue are totally reliant on these plants but also on the ants (mainly myrmica sabuleti) which tend the caterpillars throughout their whole larval stage even moving them to safe earthen pockets during the night and guarding them then taking them back up into the foliage of the Horseshoe Vetch by day, right up until they pupate. The adult butterflies live around the areas of these same plants for just a few days, mating then laying their eggs on the plants to begin another years’ cycle 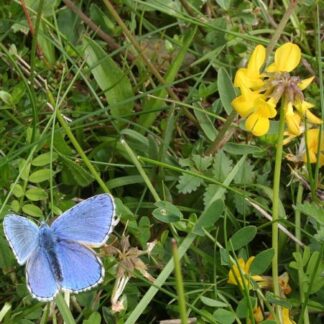