Forage for Pollinators: Most of its plants are hermaphrodite, producing Pollen and Nectar (though also being gynodioecious, perhaps 10% are female which do not produce pollen, only nectar). It is self-compatible, although insect pollinators are required for within-flower selfing. Pollinated by a huge range of bees mainly by Long-tongued Bumblebees such as the common carder bee (Bombus pascuorum), and the Garden bumblebee (Bombus hortorum), including B. lucorum, B. pascuorum, B. pratorum, B. ruderarius and Bombus terrestris. Also by the Blue Mason bee (Osmia caerulescens) recognisable on the female as she has a hint of blue.
Flowering time: May, June, July, August, September.
Growing information: NATIVE PERENNIAL WILDFLOWER, and rare in the British Isles. It grows to 1 m (3ft ) by 0.5 m (1ft 8in). Its natural habitat is chalk or limestone soils, usually grassland but also on south-facing hedge-banks and woodland margins. Flowers are typically dark blue, but occasionally white, light blue or pale violet, appearing in whorls, each plant having one or more flowering shoots, with peak flowering in late June. This large, striking, rosette-forming perennial and can live for a very long time; Dutch studies suggest that individuals can live for one to a few decades (Ouborg, 1993), and evidence suggests that plants do not flower at the beginning or end of their lifecycle, and that they produce more flowering shoots in tall, unmanaged grasslands, (Berko, 1974). It can thrive in hay meadows if hay cut is sufficiently late, and flowering shoots that appear after cutting are shorter, less branched and have a lower density of flowers than on uncut plants.
Salvia pratensis is now classified as Near Threatened and is specially protected under a 1992 amendment to Schedule 8 of the Wildlife and Countryside Act 1981 (It is an offence to pick, uproot or damage any plants listed on Schedule 8), and is threatened by habitat change, often caused by the ploughing, fertilising and re-seeding of slopes for ‘improved’ grassland, as well as the continual loss of grazing. 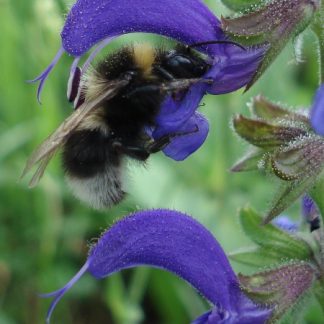