Rosaceae (family name)
Forage for Pollinators: Produces Pollen for Honeybees, Short and Long-tongued Bumblebees and Solitary bees. It is only the single-flowered roses (such as this species, or particularly ones with plenty of yellow stamens which carry the pollen), which are pollinated by Bumblebees (such as Bombus terrestris) which ‘buzz-pollinate’ the flower. The leaves are sought after by Leaf-cutter bees (Megachile centuncularis) which line their nests with these disc-shaped pieces, leaving disc-shaped holes in the leaves. Pollinated by Bees, flies, beetles and Butterflies.
Flowering time: June, July.
Growing information: NATIVE DECIDUOUS SHRUB growing to 3 m (9ft) by 3 m (9ft) at a fast rate. Thrives in most soils but prefers heavier soils. It produces large, beautifully scented flowers of pink and white hues. After flowering the rosehips ripen from October to December. Rosehips can be eaten cooked and made into jams or soups (this being a commonplace food in Scandinavia). The petals and hips are being investigated as a food that is capable of reducing the incidence of cancer. Rosehips offer promise in the recent discovery of AMPK-activators (in a nutshell, these are phytochemicals which stimulate enzyme action that combats the ageing process) thanks to its high content of trans-tiliroside. 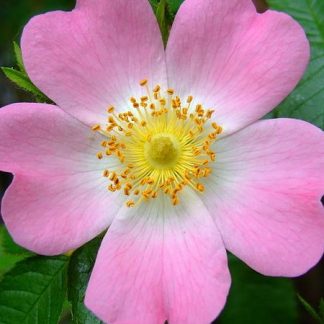