Rosaceae
Forage for Pollinators: Produces Nectar for Honeybees and Bumblebees and Butterflies. The leaves of this species have extrafloral nectaries on their undersides which Honeybees are particularly attracted to. And these are mainly found on the younger leaves, so to preserve these leaves, as the tree is pruned, it is best to take out older wood branches as opposed to a topiary/overall trim which removes the younger growth. Pollinated(though this is not desirable in the British Isles)by bees and butterflies.
Flowering time: April, May, June. NB. Flowering should be avoided and restricted with this species!
Growing information: EVERGREEN SHRUB growing to 6 m (19ft) by 10 m (32ft). Thrives in the British climate, liking many soils ranging from alkaline to acid, moist and well drained and tolerating shade. INVASIVE SPECIES which has caused loss of woodland native species due to its success in shade and drought, and birds dispersing its seed. Although this is really an unwanted species, if we are stuck with it, we can look on its positive sides: used as hedging, and kept in check, the leaves produce nectar.. Hardy to minus 23ºC. Produces attractive clusters of white flowers in profusion which pollinators will be drawn to (though these flowers should be removed before fruit sets or ripens). 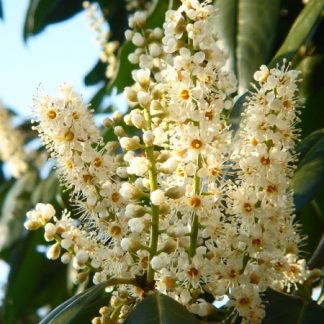