Lamiaceae(Family name)
Forage for Pollinators:Produces Nectar in abundance especially attractive to Honeybees, Solitary bees and Short-tongued Bumblebees, also produces Pollen
Flowering time:May, June, July, August, September
Growing information:NATIVE, aromatic HERBACEOUS PERENNIAL wildflower found in lowland and coastal areas of broken ground and calcareous grasslands southwards from Central Scotland to the South of England and is hardy to minus 20ºC. Growing to 0.6 m (2ft) by 0.6 m (2ft) or more, it forms close-knit rounded clumps, with copious small white flowers in dense whorls around multiple stems just above each pair of leaf axils. Its stems and leaves are covered in white woolly down giving the plant a blue-grey hue. Easily grown, it flourishes in most soils though does best in well drained, poor soil in a sheltered aspect with plenty of sun to thrive. Often grown in the herb garden as a medicinal herb. Has long been a monofloral honey source in Europe, especially in wild areas where Marrubium vulgare still grows in large drifts, its honey rarely crystallizes. If grown in large drifts and hedges in the UK it could offer serious benefits to honeybees and other bees, with its prolific nectar flow and long flowering season, buffering the June gap dearths. It is also a good companion plant for growing near tomatoes which help the tomatoes crop more heavily and for longer.
Sow seeds in April/May or Autumn in a cold frame Basal cuttings can be taken from the plant in late Spring when the shoots are about 4” high and potted up. Larger clumps can be divided and moved to permanent positions in Spring or potted up first until they are rooting. Seedlings can be planted out with a space of about 9 inches or more between each plant. No further culture will be needed other than weeding. Horehound ale is a fairly well-known drink made from the leaves. Traditionally it was made into a cough remedy that is strongly expectorant. The leaves and young flowering stems are harvested as the plant comes into flowering and used as tea or tonic which is antiseptic, antispasmodic, digestive and stimulant which can also act to normalize heart rhythm, though it should only be used in low doses as there is evidence of adverse affects with high doses and it should be avoided during pregnancy or breast-feeding. Its immediate associates may include Cirsium arvense, Malva sylvestris and Picris echioides 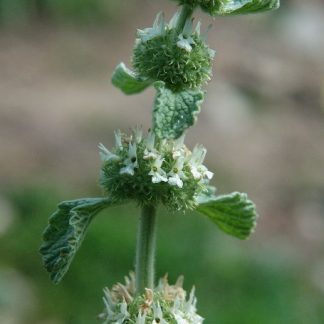