Bignoniaceae (family name)
Forage for Pollinators: Produces Nectar for Short and Long-tongued Bumblebees and Honeybees, in abundance from within their bell-shaped flowers large enough for bees to crawl into. Extrafloral nectaries on the underside of the leaves also produces nectar before, during and after flowering.
Flowering time: July, August.
Growing information: DECIDUOUS TREE growing to 5m (16ft) by 5m (16ft) in ten years. Prefers well-drained soil but does not like exposed sites. Hardy to minus 26ºC. A medium-sized tree with large (Foxglove-like) flowers which grow in great panicles of 20-40, are white with yellow spots (the corolla purple and gold spotted). A single flower when opened is two inches long and nearly as wide. They appear when the flowers of many other trees have faded and cover the tree thickly. Each individual flower though hermaphrodite requires cross-pollination by bees (with other flowers on the same tree but at a different stage) as the stigmas remain closed until after the anthers have opened and discharged their pollen. The bright green leaves appear late in the year and just prior to flowering, and also secrete nectar (an unusual characteristic for leaves) from the axils of the primary veins. An excellent ornamental tree for medium and large gardens. A tea made from the seeds is used in the treatment of asthma and bronchitis and externally for wounds. It has often been planted on land that is subject to landslips or erosion in order to stabilize the soil. 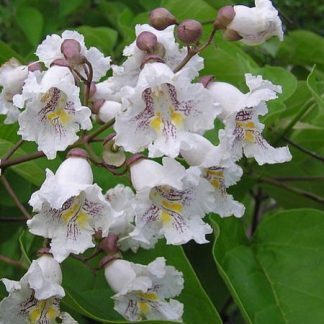 Get a 15% discount off the price of plants by subscribing to our email newsletter (you can unsubscribe at any time).