Boraginaceae (family name)
Forage for Pollinators: Produces Nectar and Pollen in abundance for Bumblebees, Solitary bees, Honeybees, Butterflies, Moths and other pollinators. Native to the Canary Islands, but sadly critically endangered and vulnerable to extinction. Its flowering spike is a giant compared to our native Echium vulgare, and also a source of dark blue Pollen.
Flowering time: June, July, August, September,
Growing information: BIENNIAL (can be TRIENNIAL, in the British Isles!) WILDFLOWER with a giant flowering spike growing to 5 – 12ft (1.5– 4m). Prefers free-draining, light and sandy soil with organic matter and fertility, particularly near the sea, and is drought tolerant. Likes full sun but will tolerate light shade. Half-hardy to 1ºC, these plants will need winter frost protection in their first year in the British Isles, and slugs are partial to it! Growing dramatically fast in their second (sometimes third) year they will throw up a giant flowering spike, and in early Autumn will self-seed freely – and these seedlings will need to be potted up for winter. NB If your E. pininana doesn’t flower in its second year but is happily growing outside, you will need to wrap some horticultural fleece around it during any temperatures below 1ºC during Winter! The most unusual feature of this plant is its protection of nectar inside the flower from vaporisation in hot weather or from flushing away when it rains. And like Echium vulgare this is why for almost all summer, this plant is a stable source of Nectar and Pollen for its pollinators. It produces nectar throughout the day, unlike most plants that just produce it for short part of the day. Please note: contact with skin can cause rashes and an allergic response, so best placed at the back of a border. 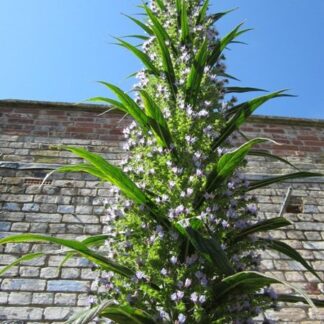