Apiaceae (family name)
Forage for Pollinators:Particularly rich in Pollen which Honeybees can be seen collecting as dark brown loads on their legs. Bumblebees (Bombus lucorum and B. terrestris) and several species of Solitary bee will visit, along with Butterflies, Moths and other pollinators.
Growing information:HERBACEOUS PERRENIALS, 45cm(18”)high x 45cm(18”)wide, which are clump-forming, making perfect ground-cover especially in dapple shade beneath shrubs and trees, but only if planted in groups. Fully hardy these plants are native across Central and Eastern Europe. Pretty white-pink flowers will rise up on stems to its full height. Suits moist, heavy, clay soils and loams though well-drained, of any pH. If conditions are drier, mulch well. Can also be grown in containers. Will self-seed on moist soil, and can be sown in spring and autumn
Photo courtesy of Bob Gibbons. Male White-tailed Bumblebee (Bombus lucorum) on Astrantia major var. rosea

We also grow the wild species Astrantia major, which has white flowers. 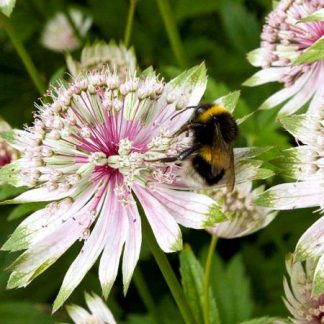