Fabaceae
Forage for Pollinators: Produces Nectar abundantly and Pollen to a great extent, and having a shorter flower-tube than red clover means it is easier for Honeybees and short-tongued Bumblebees to forage, though it will also attract long-tongued bees and Solitary bees such as leafcutter bees (Megachile species) and mining bees (Lassioglossum species). Before intensive, chemical agriculture, Clover honey, from mainly white clover which used to be sown in permanent pastures, produced 75% of British honey.
Flowering time: May, June, July, August, September, October
Growing information: NATIVE PERENNIAL agricultural variety with smaller leaves and stature which is more similar to the wild form, preferring heavy soil which leans towards alkaline, and used in a variety of mixtures with grasses or chicory or with red clover or sainfoin. It fixes nitrogen in the soil, and can be seen as an effective weed-suppressor in lawns (assuming it is appreciated in its own right for bee forage) , and is considered to be a beneficial component of natural or organic lawn care due to its ability to fix nitrogen and out-compete lawn weeds. In grass-clover farmland swards, infrequent cutting (3 times per year or less) leads to domination by the grass, and is ideal for grazing animals. Frequent cutting (6 times per year or more) such as for lawns allows the white clover to dominate. In Suffolk it has been noted that during the winter wood pigeons feed almost exclusively on white and red clover leaves and may consume 50% of the clover in a pasture.,
Clovers are a valuable survival food, high in proteins, widespread, and abundant. The fresh plants have been used for centuries though they are not easy for humans to digest raw, but boiling 5–10 minutes. Dead flower-heads and seedpods can also be ground up into a nutritious flour. White clover flour is sometimes sprinkled onto cooked foods such as boiled rice. The roots are also edible cooked.
Sow between March and September into a prepared and firm seedbed as the seed is small and ideally germinates at a shallow depth of 10mm. Or it can be broadcast into sparse lawns.
Sowing rate: 2.8 kg per acre (7 kg/ha, 0.7 g/m²) 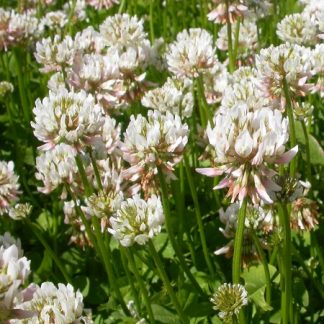