Fabaceae (family name)
Forage for Pollinators: Produces a major amount of Pollen for bees which are declining, such as the short-haired bumblebee (Bombus subterraneus) and ruderal bumblebee (Bombus ruderatus) and the endangered mining bee (Andrena lathyri) which uses only this pollen for its brood, so is dependent on it. Nectar is produced for Honeybees (though not in all years or localities), and like Broad beans, has extra-floral nectaries which likewise flow about two weeks before flowering. All Bumblebees seem able to feed on its nectar either the flower or extra-floral nectaries.
Flowering time: May, June, July, August.
Growing information: NATIVE PERENNIAL WILDFLOWER growing (scrambling) to 1.8 m (6ft). Prefers reasonably fertile, damp soils but is intolerant of permanently damp sites. These and all vetches have particularly suffered from modern, intensive agricultural practices, and together with Red Clover were depended upon for pollen by bees which are declining, such as the short-haired bumblebee (Bombus subterraneus) and ruderal bumblebee (Bombus ruderatus).
This plant with pretty purple flower spikes, has limited capacity for vegetative spread and is mainly reliant on its large seed for regeneration. This coupled with its need of surrounding vegetation for support means it is rarely found in pasture of mown grassland. It can, however, become established in meadow, particularly those cut later in the season.
Medicinally the whole plant is used (cooked) to increase lactation. It can fix nitrogen in the soil (and can be used as a green manure).
(Can be sown any time of year, and due to hard seed-coat germination can be speeded up with light scarification) 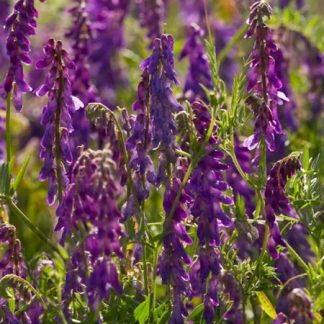