Malvaceae (family name)
Forage for Pollinators: Produces Nectar in abundance (mainly in the morning before midday, the optimum temperature being about 20ºC for secretion) and is considered one of the major honey plants all over Europe. Linden honey is considered to be valuable in both nutritional and medical aspects, producing a very pleasant slightly minty-flavoured, pale green-tinged honey. The flowers also feed short-tongued Bumblebees such as the Buff-tailed bumblebees (Bombus terrestris), the Red-tailed bumblebee (B. lapidarius), Long-tongued-bumblebees and Solitary bees.
Flowering time: June, July.
Growing information: NATIVE DECIDUOUS TREE growing to 8m (26ft) by 5m (16ft) in ten years. Medium sized tree, potentially reaching 20m (65ft) in woodland, however, this slow-growing giant can be tamed and pruned to stay within the confines of a garden, where it will flower and provide forage for a plethora of pollinators. Grows well on deep, well-drained, fertile loam of acid (pH5.5) to neutral (pH 7.7) soils. In Britain this species is considered an indicator of ancient woodland, and is becoming increasingly rare. Because of this rarity a number of woods have been given SSSI status. One such site is Shrawley Wood in Worcestershire. One reason why this species (T. cordata) is especially good to plant, apart from the fact we have lost so many in the British Isles, is because it is also the most resistant of all ‘Limes’ to ‘honeydew’ (which causes sooty black mould).
The ivory flowers are sweetly, richly scented appearing in clusters a little later than other Limes which grow here. Young leaves can be eaten raw such as in salad or sandwich filling, and Lime flowers (as a tea) are traditionally used medicinally for a number of ailments, such as indigestion, hypertension, hardening of the arteries or palpitation. The health benefits for pollinators and people are so over-whelming that it justifies growing this giant and keeping its growth checked with judicial pruning (this might keep your sandwiches topped up too!
*The Najevnik linden tree, an about 700 years old Tilia cordata, is the thickest tree in Slovenia. It is a place of cultural events, and every June a national meeting of Slovene politicians takes place under it! (*source: Wikipedia)
(Can be pot-grown for several years, and will flower from about 8 – 10 years of age). 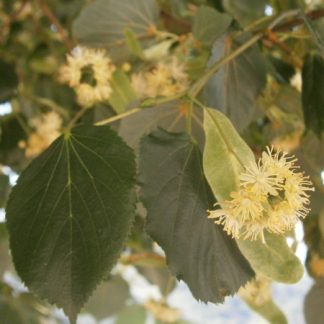