Forage for Pollinators: Produces pollen and nectar for mainly Honeybees which appear in late winter or early spring, when there is little else to forage on. Honeybees will only fly at this time of year if they are starving and need nectar, or the queen starts egg-laying and the workers will seek pollen, so these flowers can be vital sustenance.
Flowering time: December, January, February, March.
Growing information: EVERGREEN SHRUB growing to 2m (6’6”) which is bushy with small, glossy, dark green leaves. The creamy-white flowers are highly sweetly scented, drawing any bees which may be foraging to its rich pickings of pollen and nectar. The flowers first appear in December but it isn’t until mid January that the female styles have fully emerged and produce their strong, sweet scent along with nectar. The male anthers appear in mid February when pollen is produced, 3-4 weeks after the female parts of the flower appear (known as protogynous). Black, glossy berries will appear which can persist on the plant up until the following winter.
Sarcococca will tolerate a wide range of soil, growing best in moist, well-drained, either acid, alkaline or neutral pH balance, clay, sand or chalk. Hardy rating 5 in the UK (winter hardy to minus 15 throughout the UK though possibly not so hardy in exposed sites). Best grown in full or part shade, but if the soil is very damp, full sun can be tolerated. Can also tolerate dry shade, and neglect – though for the healthiest of plants make sure there is some good air-circulation around and that they are not crowded in by weeds and grass. So all in all an extremely versatile shrub! Native range is China. All our plants are propagated following organic principles, from seed, at our nursery.
Photo courtesy of Wikimedia (until we manage to get our camera in action in winter) 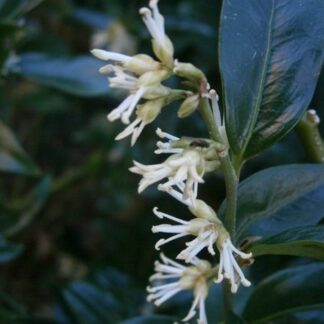