Lamiaceae (Family name)
Forage for Pollinators: Produces Nectar and is particularly attractive to Short-tongued Bumblebees and Honeybees, its honey contributing a fine flavour to other honeys gathered at this time. It is also sought after by the common carder bee, Bombus pascuorum and many Solitary bees, for example the Blue mason bee, Osmia caerulescens. Butterflies are also attracted. Pollinated by bees and butterflies. A source of natural thymol*(see note below).
Flowering time: July, August, September.
Growing information: NATIVE PERENNIAL WILDFLOWER growing to 0.6 m (2ft) by 0.8 m (2ft 7in). Prefers dry, infertile and calcareous soil, throughout the British Isles. Stands well in wild grassland, spreading by seed in disturbed soil. Dark purple buds open to pink or purple flowers. Has been used as a culinary and medicinal herb for thousands of years and is one of the best natural antiseptics because of its high ‘thymol’ content – which undoubtedly helps bees control varroa mites and undesirable fungal infections. This is our native species with a milder flavour than the Mediterranean sub-species O. Vulgare hirtum. It is noted for attracting wildlife. *Thymol is part of a naturally occurring class of compounds known as biocides, with strong antimicrobial attributes when used alone or with other biocides such as carvacrol. In addition, naturally-occurring biocidal agents such as thymol can reduce bacterial resistance to common drugs such as penicillin. Numerous studies have demonstrated the antimicrobial effects of thymol, ranging from inducing antibiotic susceptibility in drug-resistant pathogens to powerful antioxidant properties. (* source: Wikipedia).
Best sown in Autumn. 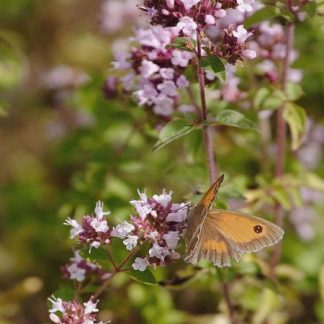