Asteraceae (family name)
Forage for Pollinators: Pollen, white in colour, and Nectar for Short and Long-tongued Bumblebees, Honeybees, Beetles, Flies. Bees are the primary pollinators and will be covered from head to toe with Chicory’s white pollen grains (excerpt Naturally Curious with Mary Holland).
Flowering time: July, August, September, October
Growing information: HERBACEOUS PERENNIAL, native to Europe and Asia and since the ‘Bronze Age’ has followed civilizations all over Europe, probably including the UK as this has always been an important crop. Grows to 1.5 m (5ft), its flowering stems growing mainly upwards. As a perennial, it produces only leaves in its first season, resembling a dandelion, and similarly it has a relatively large, brown, fleshy, branched taproot with milky sap. As a weed, chicory adapts to almost all well-drained soil types in full sun. Frequently mowed plants often end up with prostrate flowering stems unaffected by the mower. Young chicory roots are used in soups and sauces or as a roast vegetable. A (caffeine-free) coffee substitute is made commercially from the roots. Some evidence shows using this coffee substitute helps to diminish Candida albicans fungal growth, where sugar is eliminated from the diet. 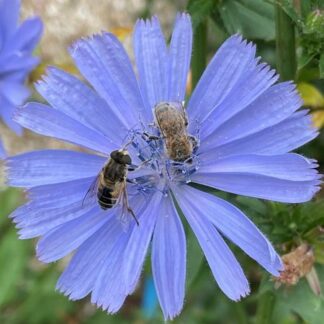