Malvaceae (family name)
Forage for Pollinators:Pollen is the main attraction for short and long-tongued Bumblebees and Honeybees, and as often happens the flowers will be stripped by bees of all their pollen as soon as it appears as it seems particularly to their liking
Flowering time: July, August, September
Growing information:Robust BIENNIEL or short-lived perennial growing from a low rosette of lobed and roundish leaves in its first year, to a tall spire in its second year up to 2.4m (8ft) by 0.6m (2ft) with brightly coloured mallow-shaped single type flowers up to 5 inches across. We have been growing and breeding only this beautiful crimson-coloured form for several years, so the majority of our seeds will throw up the same amazing colour (though if you have sandy soil the colour may become a deeper shade of red). Grows in a variety of different soils though must be well-drained, interestingly different colours seem to thrive in particular soils: the darker red shades do well in sandy soil, while the lighter colours predominate in clay soil. Easily grown from seed, or allowed to self-seed from previous years seed heads left on, though young plants are attractive to slugs and snails and can be wiped out unless you have good biodiversity such as slow worms or hedgehogs around. Planting distance 0.5m (20inches) in a line which should be staked. It is prone to attack from Mallow rust, especially if plants suffer dry conditions. Related species Alcea rugosa is more resistant to this rust. The origin of Alcea rosea was South West China, brought to Europe around the 15th Century (and used in herbal medicine to control inflammation and as a mouthwash – though we are not advocating this)! 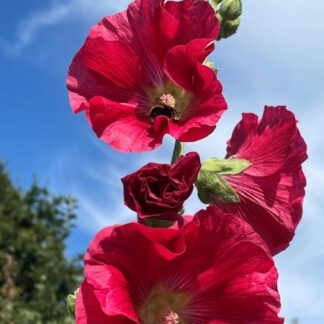