Papavaceae (Family name)
Forage for Pollinators: Produces Pollen in abundance for Honeybees, Short and Long-tongued Bumblebees and Solitary bees. So much so it is sought after even when there are plenty of other pollen sources available. The Poppy Mason bee, Hoplitis papaveris, uses Poppy petals to line its nest. It has been observed that there is also Nectar available from this Poppy at times (though this has not been observed with other Poppies). It is pollinated by insects, particularly bumble bees.
Flowering time: June, July, August.
Growing information: NATIVE ANNUAL growing to 0.6m(2ft) by 0.2m(8inches). Common poppy is found on a wide range of soils but is most frequent on light, calcareous soils. The seed ripen between July and September, and will remain viable in the soil for years. Poppies, once they have flowered in a meadow, will drop their seeds and these will remain dormant until there is enough disturbance (eg. ploughing) of the soil, so they do not recur in permanent wildflower meadows very often. If you would like to have Poppies each year, it may be best to sow them in an annual bed, save the seed and sown again in autumn (to have their dormancy broken over winter) and they will appear again in spring. You may need to weed the soil of perennial weeds in winter. 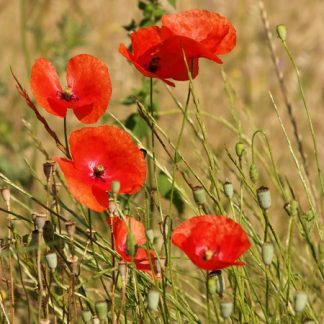