Lamiaceae (family name)
Forage for Pollinators: The brightly coloured flowers are visited for nectar by long-tongued bumblebees such as the common Carder bee. Short-tongued bumblebees can obtain nectar more reliably by making holes at the base of the flower and honeybees also use these holes. ‘Monarda punctata’ and other species with shorter flower tubes are more easily accessible for honeybees and short-tongued bumblebees.
Flowering time: July, August, September.
Growing information: HERBACEOUS PERENNIAL grows to 0.5-1m by 0.1-0.5m. Prefers moist but well-drained loamy soil in full sun to semi-shade, and is hardy to minus 15ºC. During times of drought it may need extra watering to prevent the onset of mildew. It forms aromatic, lance-shaped or ovate, sweet-smelling leaves and produces two-lipped scarlet flowers 3-4cm in length. Early last century, this species was sometimes grown in the USA as a crop for production of thymol. It was considered to be a good source of honey, which is light amber with a minty flavour. *Thymol is part of a naturally occurring class of compounds known as biocides, with strong antimicrobial attributes when used alone or with other biocides such as carvacrol. In addition, naturally-occurring biocidal agents such as thymol can reduce bacterial resistance to common drugs such as penicillin. Numerous studies have demonstrated the antimicrobial effects of thymol, ranging from inducing antibiotic susceptibility in drug-resistant pathogens to powerful antioxidant properties. (*source: Wikipedia).
Photo courtesy of Wikimedia 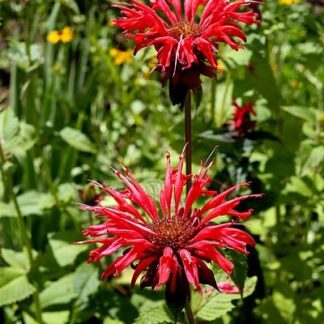