Poaceae(family)
Forage for Pollinators: Produces Pollen only (being a wind pollinated plant), and although normally grass pollen is not sought after by bees, it has been observed at Kew Gardens that Honeybees will favour this pollen above others from many flowers which are available at the same time, which was a surprise to many. Bumblebees benefit from areas of long grass, as they build their nests in the ground in long grass, such as the moss carder bee (Bombus muscorum), brown-banded carder bee (Bombus humilis), and often using old mouse holes are red-shanked carder bees (Bombus ruderarius). The tawny mining bee (Andrena fulva) on the other hand prefers bare patches in lawns or short grass, females digging burrows resembling tiny volcanoes of earth. The caterpillars of some butterfly species use it as a forage plant, such as the Essex Skipper (Thymelicus lineola).
Flowering time: April, May, June
Growing information: NATIVE PERENNIAL GRASS, so named as it resembles a fox’s tail, and is one of the earliest grasses to flower, growing to about 110cm (43inches) high. A tufted grass found on a wide range of grasslands, preferring moist, fertile soil, though not found on waterlogged or very dry soils. Sow any time of the year on bare soil (water if sown during drought). Sowing rate: 12 kg per acre (30 kg/ha, 3 g/m²). 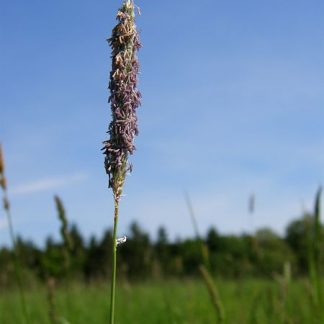