Berberidaceae (family name)
Forage for Pollinators:In flower for many weeks in the winter with bright yellow, fragrant blossom which is worked by Honeybees for Nectar on days warm enough to bring them out of their hive (anything above 10 degrees C) and Long and Short-tailed Bumblebees. The Buff-tailed Bumblebee (Bombus terrestris) has been observed foraging in winter in warmer parts of the British Isles, and milder winters appear to be allowing them to establish second generations. Because of their ability to flower in winter these plants may become more important to pollinators as the climate warms.
Flowering time: January, February, March, April, May.
Growing information:EVERGREEN SHRUB widely planted in the British Isles on account of its ability to withstand shade and tolerance of a very wide range of soils, though prefers moist but well-drained, humus-rich soil in semi-shade, preferring edges of woodland, and dapple-shade beneath trees and will tolerate sun for part of the day. It is also said to be drought-tolerant though perhaps would not grow as lush in very dry areas. This has become naturalised in some countries on account of its popularity for winter-flowering, shade adaptation and edibility. Grows to 1.5-2m (3’3”-6ft)high by 1.5m (5ft)wide in 10 years. Its grape-like fruit which can be eaten raw or used to make jelly, accounts for its common name from where it originated in North America. Generally pest-free, though can succumb to powdery mildew and rust if left somewhere too dry and or sunny. Was traditionally used by native tribes medicinally, to treat loss of appetite and digestive weakness. The fruit which has the appearance and taste of blackcurrants, ripen in late summer. 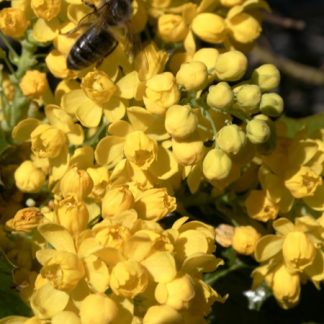