Cucurbitaceae(family)
Forage for Pollinators: Produces large amounts of Pollen and Nectar for all bees; Honeybees, Bumblebees and Solitary bees and other pollinators. Honeybees who can make honey from field-scale crops of squash or courgette, are particularly partial to its pollen which is one of the largest pollen grains found in honey. Male flowers produce pollen and nectar, while female flowers produce masses of nectar, with the baby fruit visible at the base of her flower.
Flowering time: June, July, August
Growing information: Open-pollinated variety. ‘Nero Di Milano’ produces dark green fruit up to 20cm long. It is an old favourite which likes constant picking.
Sow singly (or 2 then weed out the weaker one) into pots indoors (on a windowsill) in mid-late April. Harden off before planting out from mid May to early June at 60cm (2ft) apart, having incorporated well-rotted garden compost or horse manure into the planting holes, or better still, having prepared these in February with lots of manure. When the fruits appear they will benefit from a weekly liquid feed. Keep picking the fruits for a constant supply.
Poor fruiting is generally down to the weather. Female flowers can fail to appear if it is not warm enough – and the warmer it is the more flowers will develop.
Powdery mildew can be a problem in cooler weather too (usually in autumn), so aim for summer to be your cropping season.
Saving seed is just a matter of leaving a few fruits to fully develop (they will turn into marrows!), and open the fruits to remove the seeds which can be dried at room temperature, though out of the sun, and with lots of air, then put in an envelope. Cucurbit seeds are viable (stored correctly) for at least ten years. 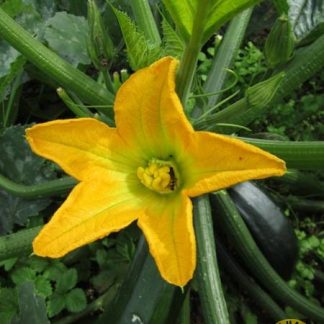