Flowering time: June, July, August, September
Growing information: NATIVE BIENNIAL wildflower crop, suitable for all soils including poor and dry soil (all but the most acid), in virtually any situation. This is the yellow-flowered Melilot and as its name suggests (meli=honey, and lotus=clover flower, in Greek) is an important honey crop in Europe, as well as a forage crop for farm animals, though has surprisingly, with lack of sound reasoning, not been extensively cultivated here. This species flowers in its second year and earlier than its white-flowered cousin (M.albus). The yellow M.officinalis is less vigorous or leafy and less likely to become a weed, and will tolerate cutting back if it must be, for perhaps a second flush, more so than the M.albus, though can be left for its whole flowering life. Both are good honey plants.
Melilot and Phacelia are good as a pasture mix: Phacelia flowers in year one, and the Melilot helps support the flowering Phacelia, while in year two, the Phacelia disappears and the Melilot flowers unhindered (see ‘Seed for Bee Pasture’ section).
It is also possible to drill Melilot directly into a grass sward which has been tightly mown. Best sown in May when it will establish fast, to flower the following year.
Sowing rate: 5 -6 Kg/acre; 1.5g/m2. Drill at depth of ½ inch (12mm). 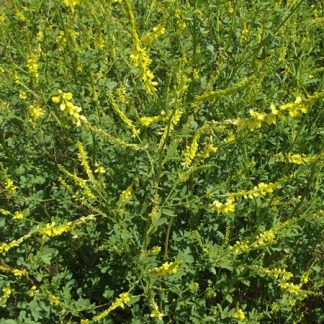