Long-term, native (to the British Isles) wildflower mix for serious nectar and pollen production, for a range of soils from mildly acid to mildly alkaline, loams from heavy to light. Over time, some of these species will thrive while others may not, thereby a balance of wildflowers will naturally evolve, supporting their pollinators. Sow into bare, weed-free soil, of low fertility or well scarified lawns. All seed 100% wildflowers, native and untreated, or organic.
Sowing rate for sowing into well scarified lawn: 1g/m2.
Sowing into bare soil must be with a grass mix (see ‘Meadow and Wild grass mix’) at a ratio of 20% wildflowers : 80% grasses. Sowing rate of wildflower with grass mix: 4g/m2. Broadcast evenly by hand (dividing the area into smaller plots and putting aside enough in a bag for each plot) onto finely raked soil, then tread or roll in (but do not try to cover with soil as these seeds are very small and if they go too deep will just lie dormant). The best time to sow is in Autumn or Spring when the soil has enough warmth for germination and start of growth and there is enough rain. (Winter sowing should be avoided unless you wish to feed the local mouse population, and summer sowing can result in delicate seedlings being knocked out by drought).
Mixed by Bee Happy Plants & Seeds
NB. We are taking the ‘arable’ weeds (so-called by farmers) Papaver rhoeas and Echium vulgare, out of this mix to satisfy purist wildflower ‘meadow’ growers. Though a few may still remain this year, we would like it noted they are also both excellent nectar & pollen sources, annual and biennial, and would disappear after their initial flowering while the seeds would lie dormant until and if the soil is disturbed. Their existence in the British Isles preceded the old farming practices which enabled establishment of wildflower meadows for farming, so it is natural for them to pop up occasionally. Poppy was an invaluable pain-killer herb used in both World wars, found growing in countryside, to the relief of wounded soldiers.
100% Wildflowers native to the British Isles
Yarrow, Achillea millefolium
Marshmallow, Althaea officinalis
Betony, Betonica officinalis
Clustered Bellflower, Campanula glomerata
Common Knapweed, Centaurea nigra
Greater Knapweed, Centaurea scabiosa
Wild carrot, Daucus carota
Lady’s-bedstraw, Galium verum
Meadow crane’s-bill, Geranium pratense
Field Scabious, Knautia arvensis
Bird’s-foot Trefoil, Lotus corniculatus
Oxe-eye Daisy, Leucanthemum vulgare
Musk Mallow, Malva moschata
Wild Oregano, Origanum vulgare
Ribwort Plantain, Plantago lanceolata
Cowslip, Primula veris
Selfheal, Prunella vulgaris
Meadow Sage, Salvia pratensis
Devil’s-bit Scabious, Succisa pratensis
Dark Mullein Verbascum nigrum
Common vetch, Vicia sativa ssp. Segetalis 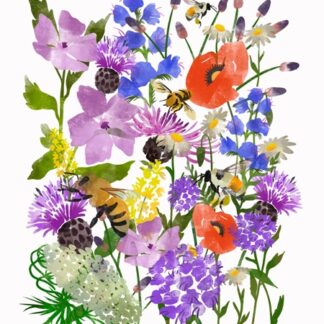